Three weekends ago (yes, I have been insanely busy), I followed him back to Penang, his hometown in Malaysia. Leaving straight after work on Friday, we went home for a quick shower before leaving for Golden Mile, where the pick-up point was for the coach. We were taking an overnight coach all the way up to Penang.

The coach was new, he has never travelled with this company before and it was an eyeopener for both of us - more for me of course. This country pumpkin was so amazed at how luxurious the seats were - just like flying business class on an aeroplane! We even had our own personal TV screen, showing a great variety of outdated shows but it was still a good selection. The seats reclined as well!!!!! It was amazing; like a lazy boy - minus the leather of course.

However, the 9 and a half hour journey wasn't very comfortable. According to him, the seats did not recline as much as the other company's coaches and both of us didn't manage to catch as much sleep as anticipated. Nevertheless, the moment we arrived in Penang, put our bags down at his place and washed up, it was out of the house for the 4 of us (his parents included).

Here's what we did.

Food (1) Hokkien Mee - apparently not one of the best food stall for it
Food (2) Char Kuay Teow - DELICIOUS but it'll never be my fav
Food (3) Yam Cake - at least I tried...don't know why I thought I heard them say fish
Food (4) Otah ?soft, juicy and different from Singapore's

Activity (2) Drive around Georgetown before coming to his next favourite food stall...

Activity (3) To a famous chinese temple up on the hill and then to another temple (used to be the biggest sleeping goddess in the world) before going for lunch... 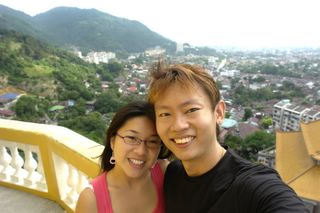 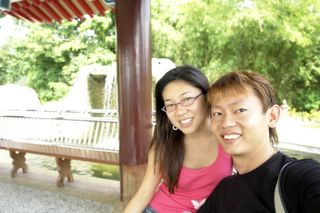 Activity (4) Take a long drive around Penang's coast, stopping by at a hillside plantation for...

Activity (5) Continued on our road trip around Penang Island before returning home for a rest at around 3pm which involved...

Activity (6) Drive to another part of Penang for appetizers...

Food (12) Fried Lalas - it wasn't the highlight, just to keep the mouth busy while waiting for...
Food (13) Grilled Female Crabs - I've never had it this style (YUM) and the female crabs had so much eggs!! I learnt to eat crab eggs that day. 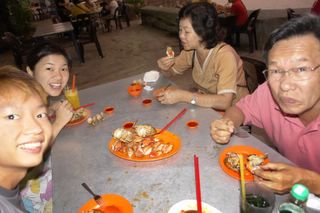 Activity (7) Drive to Gurney Drive, queued along the road till we were almost giving up when we found a park, got out of the car and walked to the food market for more...

Activity (8) Dropped off the parentals for their beauty sleep (10pm) before zooming off to a pasa malam (night market) and then to the beach to watch the starless sky.

Ahhh, finally an activity that didn't involve any eating. Bliss!

And that was my long first day in Penang.

The second day, we woke up at 9am, washed up and got ready to embark on another day of activity. I promise it doesn't involve too much eating.

Activity (9) Off to one of his favourite breakfast places for...

Activity (10) Went to check out this big house in Penang

Activity (11) Then we went to the Youth Park where there were loads of people exercising, and children, playing on the swings and stuff. We took loads of pictures as well. 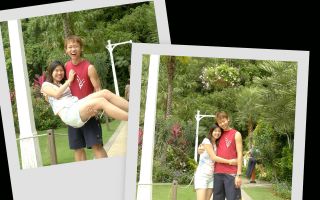 Activity (12) Dropped his parents back home before going out again to a 5-star hotel for massage and spa treatment. I'm not one who appreciates such things, to me it was pain and torture, but I did feel more relaxed after that so I guess it worked.

Activity (13) I had been craving for ice cream the whole time in Penang ever since I saw Baskin Robins so after the massage, we went to the shop beside Baskin Robins? Why? Coz he wanted to introduce me to a shop called Ice Ice Baby which had baby faces all over the shop! They served amazing desserts! 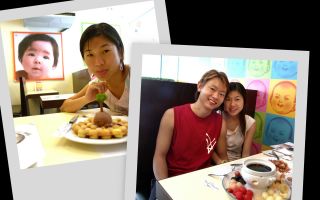 Activity (14) Then we went shopping! He took me to this big shopping mall called Comta where we walked the floors. He bought me a nice 3/4 black pants and a pink singlet, before rushing home for dinner with his sister and family.

Food (22) Fried Egg Oyster - bought from the food stall opposite their apartment.
Food (23) Steamed fish drenched in tomato sauce - it tastes just like how mama cooks it.
Food (24) Brocolli with mushrooms - nice and healthy for a change.
Food (25) Steam egg with prawns - another nice, healthy and delicious dish.
Food (26) Chicken Soup - another dish very much like how mama cooks it.

Activity (15) Shower, Pack-up, and get ready for the bus ride home, which was even better than the bus ride to Penang though the coach was slightly older and there weren't any personal television set. We travelled with another coach company this time around, one he frequently travels with and it was nice because the seats could recline to almost horizontal and we managed to get better sleep on our way home, to recharge us for the next working day.
Posted by Mrs Yap at 11:03 am No comments:
Email ThisBlogThis!Share to TwitterShare to FacebookShare to Pinterest
Newer Posts Older Posts Home
Subscribe to: Posts (Atom)